I must confess, I am probably not the best person to talk about getting organized.  I’m one of those people who buys a calendar, uses it for all of January, and then….where’d that thing go? Short attention span, maybe? Or too much going on in my life?  If so, you’d THINK I’d be better about sticking to it, wouldn’t you?

*clears throat*   When it comes to organization, I’m more organISHed than organized! Which is why I plan to glom everyone else’s posts and see if I can find some good life hacks! I am organized about some things, and other things I’m trying. Here are the ways I’m trying to bring order to chaos:

BOOK FILES:  On my laptop, I have a folder called “BOOKS” under my documents.  Within that folder, I have folders for each project, as well as folders for my writing expenses, my blog posts, and pictures that inspire characters. 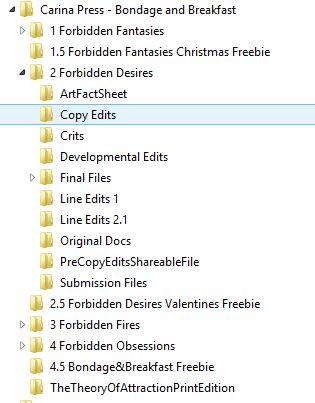 For example, I have a folder for my Bondage and Breakfast series with Carina.  There are multiple folders there…one for each of the 4 published books, one for each of the short free pieces I’ve written between the books. With each of the book’s folders, I have additional folders for files on each phase of the process…original files, crit files, submission files, developmental edit files, copy edit files, and then final files.  I can see, in a snap, everything related to a specific project.

MICROSOFTE ONENOTE: I’m playing with OneNote as a way to organize ideas for books. So far, I’m not loving it, but because I see the potential and I also see a good use for it in my day job, I’m signed up to take an online class for it as part of my education for the year. Shhhhh…..tell no one I’m doing double duty!

EXCEL SPREADSHEETS:  I have two I keep pinned to my desktop…one is my character bible, where I keep track of things like names, nicknames, ages, hair and eye colors, jobs. I seem to have a thing for the name Marcus and the name Alex, so, uh….this is totally necessary!  The other is a word count tracker that I started out GREAT on at the beginning of the year…and totally fizzled on.  Not sure it’s working for me, so I’m hoping someone else has a better version or way for that. 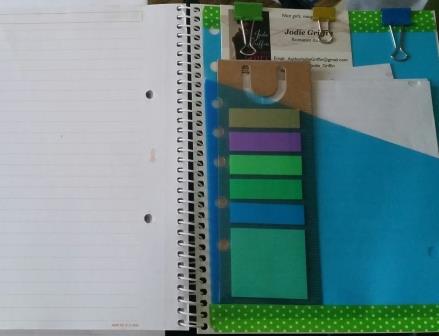 WRITING ON THE GO:  I keep a notebook with me at all times. A small one lives in my purse, but when I travel (and leave my laptop behind) I bring out the big guns… a real notebook and a pencil case carrying everything I might need. I like the 6.5” x 8.5” spiral notebooks you can get at Target or Walmart. The last one I bought, which I love, didn’t have a folder, so I added one myself to the back cover.

Have you met washi tape yet? It’s awesome. I also make sure I have binder clips (love those things – they work better than paperclips, IMO) and post it notes in every color of the rainbow.  My pencil case doesn’t have pencils, it has pens, washi tape, a pair of scissors, highlighters.   This way, I’m set for anything I want…jotting notes, edits, reading a hard copy of something I’m working on.  I’m also trying to set up a bag that’s a mobile office. My notebook and my pencil case would go in there, along with some snacks (writers gotta eat!) and anything I need that doesn’t fit into the notebook or the pencil case.

ALL IN ONE BINDER:  I’m also testing out a binder system. Same size, but with the ability to add pages in whatever order I want. A little heavier so not as convenient, but I also have a portable hole-puncher I can keep right in the binder so I can add things easily.   Target has a pretty good selection of stuff for these smaller binders, including pocket folders, dividers, sheet protectors and loose-leaf paper. Plus, there are a ton of printable pages online to help customize what you need. And because this blog hop got me thinking about the fact that my brain no longer coughs up info as easily as it used to and some stuff just slips right out of my mind, this weekend I bought an academic planner for $1 at Dollar Tree, took the wire binding off it, and plopped it right into my binder! Voila!  I usually buy a wire-bound calendar each year anyway, but I’m thinking if I keep a one in the binder, I might use it more. 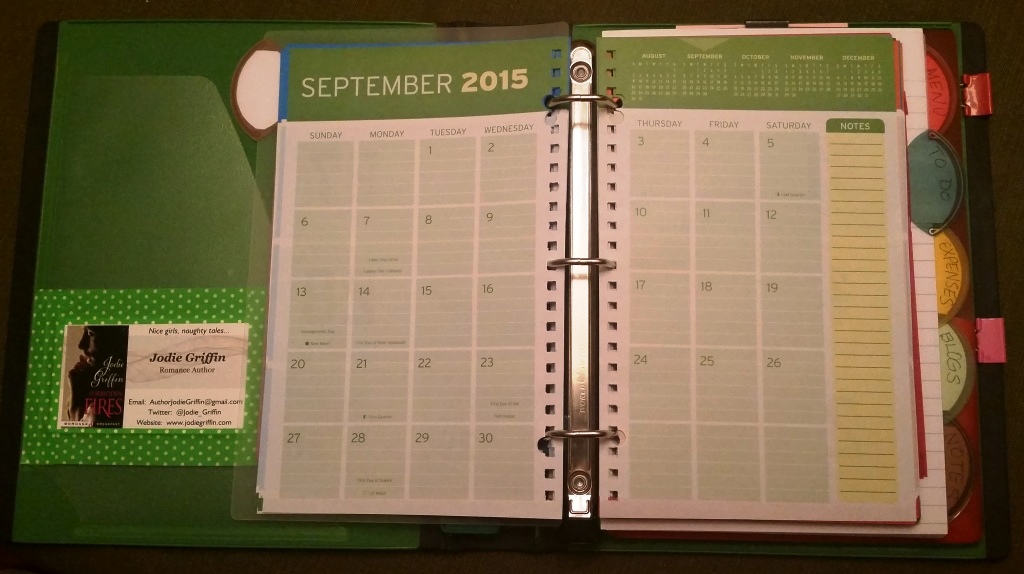 I can think of other things for the binder as well:  Expense register. Word count goals. Blog post ideas. A copy of my character bible. Self-care journal with things like food tracking, water intake, exercise.  Grocery list. Vacation planning.  School schedule.  And these don’t have to be all separate pages, either….I love the idea of bullet journaling.

MY SUGGESTIONS:  If you’re trying to figure out how to get organized…look on tumblr or Pinterest! There are a ton of blogs out there for getting organized, mostly school stuff but easily adaptable for a writing life! Though I do have to warn you – both those sites may make you feel like you can never measure up. Ignore that, look for ideas that you can use and maintain, and toss the rest of it out the window!

Anyway, I hope you enjoyed my story of organISHation, and I’d love to hear what tricks you have for keeping your life together!  Also, click the link below for a chance to enter a giveaway!

When Forbidden Fires came out, the wonderful Gillian Archer asked me if I wanted to post at her group blog, Silken Sheets and Seduction.  Below is the interview I did with Delia and Colin for that blog, originally posted in April 2013):

I stopped by Delia’s apartment today to interview Colin and Delia for this blog post.  They sat together on the sofa, Colin with his sock-clad feet on the coffee table and Delia tucked into Colin’s side.  He had his arm curled around her neck, his fingers stroking her throat lightly. The sparks that fly between them are obvious, even to a relative stranger.

Thanks for letting me interview you! Let’s start with a background question.  You and Colin used to be a couple, but you went your separate ways a year ago.  Were either of you in a relationship at the start of this case?

Colin: *pulls back to look into Delia’s eyes, his fingers still*  What the hell? You told me you weren’t dating anybody.

Delia:  I wasn’t!  But… for the few weeks before you came by the station, Roy had been asking me to go out with him. I was thinking about it, but something kept holding me back.

Colin:   *scowls* Oakes? You were gonna go out with Oakes? Your partner when you go under as a hooker? Which I hate — you know that, right?

Delia:  *sighs, relaxes back against him, her hand over his heart*  I know you do, but it’s part of my job. Anyway, I said I was thinking about it, but I told him no, so no harm, no foul.

What about you, Colin?

Colin:  I, uh…No. No one was Delia. *kisses her temple and squeezes his fingers lightly against her skin*

How would you describe your personality, Delia?

Delia:  Ugh, I hate talking about myself. Um…. driven?

Delia, how would you describe Colin’s personality?

Colin: *covers her mouth with his hand*  Yeah, enough already. That’s gonna earn you a spanking.

What one thing would you take to a deserted island?

Delia: And again I say Yay!

How about vacations? If you could go anywhere, where would you go?

Delia:  That deserted island sounds pretty good. I can just see us now, living like natives.

Colin:  *plays with Delia’s hair, tugging it so her head tilts back and he can kiss her* Natives, huh? Now that gives me an idea. *his voice lowers to a mere whisper*  I think we’ll go native this weekend. I’m off work, you’re off work.  We’ll lock the door, take off all our ….

*Clears throat*  Moving on.  What is your partner’s most distinguishing characteristic?

Colin:    *gets serious* Her brain.  Love the way her mind works, even if it does sometimes cause me grief.

Colin:  What? *kisses her thoroughly until they’re both breathing hard*  Just telling the truth.

Delia:  *grins* I was going to say “wicked streak.”

Colin: *rolls eyes* Sure you were.

What is your major skill or talent?

Delia:   *leans in to cover his mouth with hers*

Which actor or actress would you want to play you in the movie?

Thanks for talking with me today. *picks up bag and heads toward door* They walk me out, thank me, and as the door closes behind me, I hear the snick of a lock and then a low, heated command.

I hear the unmistakable sound of hand meeting ass, and a contented sigh.  And then, nothing.