Today’s guest blogger is fellow Carina Press author Debra Kayn, one of the nicest people I’ve met on Twitter.  She stopped by to talk about — Well, what else? Romance!

Why do people read romance books? Why do I write romance books? I bet we all do it for the same reason. I love seeing two people, two different personalities, grow closer to find love. I like to call it The Dance.

Two strangers spot each other across a crowded room. What do they do? They gaze at each other. Could be a fleeting glimpse where they keep going back for more, or they could openly stare, waiting to see who looks away first. It’s the eye dance.

You finally meet that person you’ve been eye dancing with, and you start the body dance. You lean in, he leans in. You angle your body, he turns, and you notice if you move just a few more inches, your bodies would fit together better than two puzzle pieces. This is the body dance.

Now we’re moving! It’s time to hand dance. You touch him. He touches you. Both of you are touching your own hair, your arms, his thigh, and body parts are tingling.

It’s time for you to create your own dance. What does the person look like who caught your eye? It can be someone from your life, or you can create your perfect person…because that’s what I get to do every day when I’m writing a book.

Multipublished Romance Author, Debra Kayn, lives with her family in the beautiful coastal mountains of Oregon on a hobby farm. During the summer, she enjoys riding motorcycles, gardening, playing tennis, and fishing. During the winter, you’ll find her outside playing in the snow. A cold weather nut, she lives for the days she’s snowbound and fighting with the woodstove to keep the house warm when the power goes out. A huge animal lover, she always has a dog under her desk when she writes and chickens standing at the front door looking for a treat. She’s famous in her family for teaching a 270 lb pig named Harley to jog with her every morning. 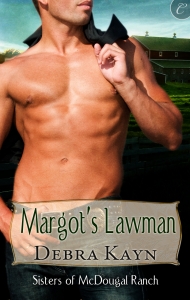 Her love of family ties and laughter makes her a natural to write heartwarming contemporary stories to the delight of her readers. As someone who met her husband on a blind date when she was nineteen years old, she’s a believer of love at first sight and happily ever after. 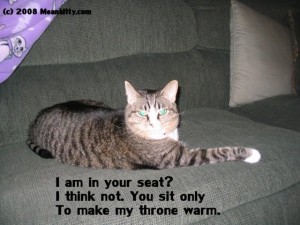 Today, I’d like to welcome Jody Wallace and her furry owner, Meankitty, to my blog.  Remember the cattification of Forbidden Fantasies? Yep, same human and same cat, and I’m thrilled to have them visit!

Books That Meankitty Wants You To Write Next. You, meaning blog owner, writer-type visitors and Typing Slave. Visitors of the reader-type ilk can add their HECK YEAHS! in the comments.

1.  Furbidden Fantasy: When Alma Anderson has to choose between her new, cat-allergic boyfriend and opening a cat sanctuary, even though her neighborhood isn’t zoned for animal sanctuaries, she’ll go up against city government, the Home Owners’ Association, and her boyfriend’s expectations to make her fantasy come true. Her Furbidden Fantasy.

2.  Fifty-Four Shades of Grey: Follow the adventures of gorgeous grey tabby MamaKitty and her five similarly colored offspring as they use up almost all of their nine lives (equalling fifty-four total)…saving the world from copyright violations! And also, the alien menace.

3.  The Hunger Games: Mockingbird Edition. Sassi is a housecat who dreams of escaping her prison in order to eke revenge on the evil bird that flaunts itself on her porch on a daily basis. Ghost is a stray who dreams of being an indoor-only human owner. When Sassi meets Ghost through the glass back door, they hatch a plot to do away with the bird and Ghost’s stray status once and for all.

4.  The Girl with the Dragon FooFoo: Lucy Locket is an attractive, lazy and highly intelligent feline house dweller whose greatest joy is her Dragon FooFoo. This small stuffed catnip dragon has been Lucy’s favorite toy since several weeks ago, at least, or maybe even a month. But one day, when an unusually vigorous play session in the kitchen sends Dragon FooFoo into the Lost Zone under the fridge, Lucy begins to fear the worst. Will Dragon FooFoo ever resurface, perhaps after the humans clean house, or will Lucy be fated to spend half of every day peering under the fridge, meowing piteously?

5.  Calico Joe: (Note: book has nothing to do with lawyers or baseball) Joe is a housecat of average intelligence, breeding and whisker-length…with one small difference. Joe is a CALICO. And a male. When word gets out about him, his life takes a turn for the crazy. Joe’s existence becomes a series of stud sessions, hot ladies, and high-dollar tuna, as humans, desperate to capitalize on Joe’s rare DNA for the next generation, pay top dollar for Joe to visit their kitty in heat. When his travels take him to far-away and exotic land, Joe realizes that he’s got to give up this lifestyle or suffer the consequences. Follow him on his quest for kitty self-realization and some time off for “Little Joe” when he escapes his carrier and learns to survive on the mean streets of Boise, Idaho.

6.  Steve’s Jobs: Steve of Eight, an indoor/outdoor cat who owns a large apartment complex, has many humans who must be tended to every day. In many apartments, Steve must enter the lives of these mostly helpless two-legged creatures in order to perform routine electronics and computer maintenance by depositing the required amount of hair into keyboards, chewing through power cords (not plugged in), spilling glasses of water into any vents available, and hiding TV remotes. He thinks he’s on top of all his jobs…until the humans in the apartment complex get together for a party and realize Steve of Eight is playing to ALL of them! While they are amazed at Steve’s capacity for multitasking, the inevitable jealousy sets in as each human tries to have Steve’s Jobs all for himself.

7.  Game of Thrones: In a mystical land beyond imagination…in a suburban neighborhood called Western Wood…live five cats who would be king. The various thrones in the large, brick, split-level ranch home are comfortable, soft and perfectly suited for feline snoozing. The only problem is, each cat can only occupy one throne at a time, and whenever he or she leaves that throne to eject an interloper from, say, the recliner, some usurper is sure to re-take the desk chair! Musical thrones and intrigue at its finest, with war, bloodshed, yowling and violence on a regular basis, this game is not for the dog-hearted, not for humans, not even for ferrets. It’s a cat’s game of thrones. It’s a way of life.

8.  Water for Elephant: He’s one big cat. He’s Elephant. He likes his food crispy and dry, and his water freshy-fresh. In fact, if Elephant doesn’t have fresh water, less than 2 hours in the bowl, Elephant gets mad. You won’t like Elephant when he gets mad, because he makes water elsewhere in the house…that usually involves clean laundry. Water for Elephant is a psychological thriller about a cat, his water dish, and the ignorant humans who continually forgot to freshen it.

9.  One Thousand Whiskers: Every time you find a whisker, did you know that somewhere, a cat ate a fairy’s wings? Don’t worry, though! They grow back. (The whiskers. Who cares about the wings?) This is the half-true story of the dewinging champion of all time, Master Fey, and the one thousand whiskers he lost in his noble quest to earthbind the fairy race, because DANG is it ever annoying how they just fly off like that when you want to sit in their laps and receive the petting you deserve. 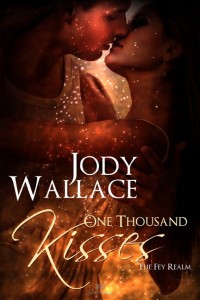 The book written by my human in which cats reign supreme:

ONE THOUSAND KISSES by Jody Wallace

When one path closes, another opens—if they survive the journey.

Embor Fiertag, Primary of the Court, has overcome no tougher challenge than the three facing him right now: get reelected, capture the rogue agents who tried to murder him, and improve his love life. The third one should be easy—except he hasn’t exactly told Court trainee Anisette Serendipity she’s his foretold bondmate. Plus, she’s dating his chief political rival and doesn’t seem to like Embor. At. All.

Ani has good reason to avoid the stern, serious Embor. Her wayward sister almost got him killed once, and now he monitors Ani like he expects her to do worse. But Ani’s not the adventurous type. She can’t even break up with Warran Torval, a man she knows she doesn’t want, a man who spends half his time plotting Embor’s downfall.

When Torval attempts to force a bond with Ani, Embor senses her fear and steps in…directly into an unsavory political strategy gone all too right. Forced to flee together to humanspace with a manipulative magical cat, Embor and Ani must find the courage to reveal—and heal—their vulnerabilities before the fabric between the Fey Realm and humanspace is ripped to shreds.

Warning: This title contains sex, fairy drugs, rampant gnomes, bloodshed, and cats ruling the world. As they should.