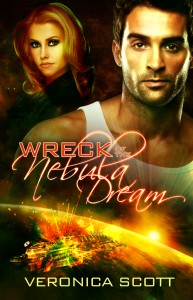 Today, I’d like to welcome my friend Veronica Scott to my blog. Veronica and I met on Twitter(@vscotttheauthor) and have been having a great time ever since.  She’s incredibly supportive, and she’s a really fun person to hang out with.

VERONICA:  So happy to be guesting on your blog today, talking about my science fiction adventure novel WRECK OF THE NEBULA DREAM.  Readers seemed pretty intrigued with one of my secondary characters, Khevan, a member of the D’nvannae Brotherhood, an order of assassin/bodyguards, serving a mysterious alien deity The Red Lady. So I thought I’d interview him today.

Traveling unexpectedly aboard the luxury liner Nebula Dream on its maiden voyage across the galaxy, Sectors Special Forces Captain Nick Jameson is ready for ten relaxing days, and hoping to forget his last disastrous mission behind enemy lines. He figures he’ll gamble at the casino, take in the shows, maybe even have a shipboard fling with Mara Lyrae, the beautiful but reserved businesswoman he meets.

All his plans vaporize when the ship suffers a wreck of Titanic proportions. Captain and crew abandon ship, leaving the 8000 passengers stranded without enough lifeboats and drifting unarmed in enemy territory. Aided by Mara (and Khevan), Nick must find a way off the doomed ship for himself and several other innocent people before deadly enemy forces reach them or the ship’s malfunctioning engines finish ticking down to self destruction.

But can Nick conquer the demons from his past that tell him he’ll fail these innocent people just as he failed to save his Special Forces team? Will he outpace his own doubts to win this vital race against time?

Here’s a description from the book of the first time Nick encounters Khevan, on the shuttle ride up to the Nebula Dream:

Sipping his drink, Nick assessed the only other man on the shuttle who was as deadly as Nick himself could be when the occasion demanded –  a D’nvannae Brother, dressed all in close fitting, soft black leather, as they usually were when traveling outside their world. The swirling red tattoo all D’nvannae wore proudly inscribed on the right side of the face, as a sign of fealty to their Deity, was particularly well defined on this man. He must be senior in the hierarchy, given the number of details in the tattoo. Gotta earn those the hard way in the Lady’s service. Halfway paying attention to a broadcast of an inter Sector sports semifinal, the Brother was unbraiding his long, jet black hair, signifying his contract had been successfully complet­ed and he was now at liberty to accept another.

Who on backwater Glideon might have needed such a high-priced, exotic bodyguard? Or been the target of such a re­lentless assassin? The D’nvannae could be hired for either pur­pose, conflicting offers resolved by the whim of the goddess.

As if sensing Nick’s gaze, the Brother turned, eyeing him for a long minute, eyebrows drawn together in a frown. He had a strong face, thin lips, high, chiseled cheekbones, and intense black eyes which betrayed nothing of the thoughts going on behind them. Sensing no challenge, nothing on Nick’s part but bored curiosity, the other man nodded, the fine muscles of his face relaxing.

Raising his glass in salute, Nick tossed off the drink as the Brother dismissed him, in favor of watching a replay.

When I was very young, perhaps 3 or 4, my father brought me to the Brotherhood on our home world. I am told he was poor and hoped that by dedicating my life to the service of the Red Lady, he could ensure a better future for me. It is a fairly common occurrence. I’ve known no other life than the Brotherhood until now. It is a life of discipline, sacrifice and rewards.

From boyhood I have studied, trained and practiced to be very very good at what I do. Martial arts, assassination techniques, culture, history – one must be well rounded to reach the highest levels of the Brotherhood. (Khevan smiles and lowers his voice.) And then there are the…other arts that the Lady decrees her high ranking servants must learn, to please her in human form. Those skills come in handy on certain assignments as well.

Before the action in the book, what were your plans/hopes for the future?

I was on the path to reach the highest levels of my Brotherhood, completing many dangerous missions of assassination or guarding others against death. The Lady decrees who we contract with and whether we are preserving life or taking it. Some say it is at her whim. I chose to believe she had a plan that was beyond our human comprehension. (Shifting uncomfortably in the chair, Khevan frowns.) I needed to believe that to carry out my assignments at times. I was an Intimate Initiate of the Order, which means I have been privileged to serve the Lady of the Flames herself. Those private rituals are not to be spoken of outside the Brotherhood.

It became necessary on the Nebula Dream to in essence defy my Lady in order to save lives. I know Veronica doesn’t wish to provide spoilers, but there were consequences, to myself and to another…

VERONICA sez:   I think we’ll leave it there. WRECK OF THE NEBULA DREAM  is available from  Smashwords ,  Amazon and Barnes & Noble at a special 99 cent  price.  Thanks for having us as your guests, Jodie!

JODIE:  Thanks for stopping by today, Veronica! So here’s what I want to know…will Khevan have his own story?

When Alex pulled into the garage after the shift from hell, all he’d been thinking about was sleep.

Tired flew right out the window as he watched his sexy wife playing with the bubbles in the tub. Playing him. Jess was definitely in one of those turned-on, hell-on-wheels-in-bed moods tonight, but he didn’t mind the game. Not at all.

Yes, I finally remembered to pre-register for Six Sentence Sunday where authors can post any six sentences from their writings.  Today’s offering is from Forbidden Fantasies, my debut novella from Carina Press, which came out in March.

If you follow me on twitter (@Jodie_Griffin) you might catch other sentences from Forbidden Desires, my next Carina Press novella coming out in November, or from Forbidden Fire, the story I’m writing now.  I’ve been sharing bits and pieces of them as I write/edit.

Thanks for stopping by, and I hope you enjoyed a glimpse into Alex and Jess’s life!

“Oh, hell,” Colin muttered under his breath, dropping the boots to the ground.  He reached out and pulled Delia into his arms, making the decision for both of them.  He’d stop if she protested — maybe — but he wasn’t waiting another minute.

His mouth slanted over hers, not gently like a first kiss between new lovers, but with all the passion of someone who’d been away from home too long.  He shuddered as his heart pounded, adrenaline racing through his veins like wildfire.  When he splayed his hands against her back, the ends of her red ponytail brushed across his knuckles, and another shudder ripped through him.